Joel Murphy and Andy McIntyre continue their quest to watch maligned movies in hopes of finding a silver lining. For the month of August, they are going deep on unnecessary movie sequels.

This week, they dive deep into the View Askewniverse, Kevin Smith’s cinematic universe that began with his breakout 1994 film Clerks. Jay and Silent Bob Reboot sees the titular heroes once again traveling to Hollywood to stop a Bluntman and Chronic film. Together, Joel and Andy find its silver lining.

Earlier this week, Joel Murphy posted photos and a feature article about the 14th annual Baltimore Comic-Con, which was held this past weekend. But what he didn’t talk about in that article was how he ended up in the background of a segment being shot for the new season of Comic Book Men, which featured Kevin Smith and Jason Mewes interacting with the guys from the show. On this week’s podcast, he shares that story (and gives some insight into all of the careful planning that goes into filming “reality” TV).

Murphy and Lars also share the story of a vigilante movie reviewer who called the police to stop a man from using his phone in a theater. And, they tell the most adorable and sexy story ever involving Batman, a cat and a burning building.

How real is reality TV? How do Canadian police sirens sound? How underwhelming is Joel’s sexy voice? The answers to these questions and more are in this week’s podcast. 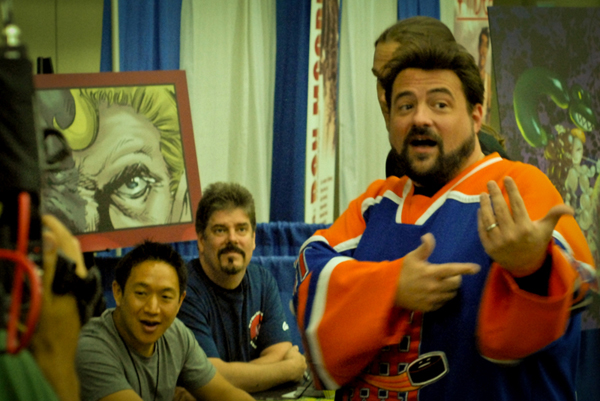